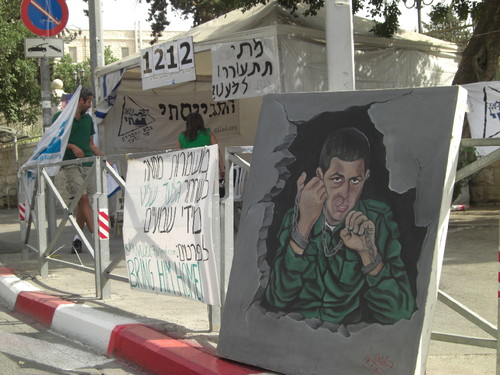 Joy in Israel over Shalit's return, and in Gaza over the return of Palestinian prisoners, was a commercial break from the dance of death and despair that accompanies this decades-old bloody conflict.

At 4:45 P.M. the two iron birds, brown and heavy, appeared in the sky above Mitzpeh Hila, making a huge racket. One Yasur helicopter banked toward the east and disappeared, while the other circled over the community that was crowded with people and painted blue and white: Blue-and-white flags in the hands of the crowd, and blue and white on every wall and under every leafy tree; all to greet the long-awaited returnee.

The helicopter carrying the long-lost son circled slowly, as if to exploit the moment to the fullest - perhaps it was a victory circuit, perhaps as a gesture to Gilad, so that he could see his home from above before getting grounded in reality.

The nightmare is over. The Shalits' nightmare is over, and Israel's nightmare is over. All eyes looked upward and all hearts - even those who were fed up with the Gilad Shalit circus - totally melted, perhaps even skipped a beat, as they say (what was that dampness that I suddenly felt pooling in the corner of my eyes?).

That was one of the high points of the long, exhausting day in Mitzpeh Hila; the other was when the white Savanna drove slowly up the road that leads to the Shalit home. When it passed me, it was already drenched with champagne and strewn with white roses that celebrants had thrown at it.

At the exact same time, only a three-four hour drive from there, at least as much rice was being thrown at the vehicles carrying the released prisoners through the streets of Gaza.

Yesterday was one of those rare days - too rare - in which happiness, the exact same happiness, reigned in both Gaza and the Galilee. In a reality in which one side's joy is inevitably the other side's pain, and one side's victory is the other side's defeat, this moment in which happiness - however fleeting - prevailed among both peoples, is a moment that won't be easily forgotten. It was a brief respite from the zero-sum game, a commercial break from the dance of death and despair that accompanies this decades-old bloody conflict.

A short while after the Shalits came home, Noam Shalit came out and told the crowd, in his restrained way: "We've experienced the rebirth of a son," fitting a storm of private and national emotions into those few, almost dry words.

Even the first embraces were very restrained - not just those of Netanyahu, Barak and Gantz, which looked as if they had been imposed on Gilad - but even the first hug he got from his father, which has to have been one of the most restrained hugs ever seen in this land of schmaltz and backslaps.

But while it seemed totally atypical, in Mitzpeh Hila they begged to differ: Gilad had always been the community nerd, the boy who always walked around with his eyes down, the son of one of the most closed and distant families in the town.

It was one of the longest days ever for this quiet, western Galilee community, which few had ever heard of before 2006. Immersed in greenery, with each house distant from its neighbor, it's a place where people sought a peaceful, quiet life and instead were suddenly thrust into an unexpected drama that lasted more than five years. Almost five years, four months, and then another eight hours that passed from the IDF spokesman's announcement that "Gilad Shalit has returned home," until his return home happened for real.

Until then, dozens of journalists wandered up and down the streets, photographing and photographing. Activist hugged activist, and journalist interviewed journalist, all of them trying to kill time during the seemingly endless wait. There was plenty of tension, even after he was seen in the Egyptian TV interview, as rumors spread about his health, and that he might not even return to Mitzpeh yesterday.

Then he arrived, and the crowd started to sing "The people of Israel live" and then a string of hassidic songs, which seemed a little foreign to this community and this family. There was also joyous dancing with the flag that seemed taken straight from a West Bank outpost.

But in fact, the assembly of people awaiting Gilad was not typical: Jews and Arabs, religious and secular, including two Chabadniks who offered anyone interested a chance to bless the lulav and etrog, and those wearing large knitted yarmulkas - who one would have assumed opposed the deal. Brothers sitting together.

The Arab towns en route to Mitzpeh Hila were also full of greetings for Gilad: the Abu Razi restaurant in Yarka, the local council of Mi'ilya, N.A. Khader Center and the Al-Rif Cafe.

In the evening, Shalit activist Gadi Shabtai pulled two bottles of champagne from the refrigerator in the clubhouse, where many had gathered all day to watch the drama unfolding on television. OK, so it wasn't exactly French champagne, only Spanish cava, but he was hoping that the sparkling wine, or whatever it was, would do the trick.

A resident of Rosh Hanikra, he has been agitating for Gilad's release for a year; two days ago he pulled the cork on a different bottle of cava and poured some of the yellow bubbly on Noam Shalit.

He owns Meital, which he describes as "sort of like Tami 4, but for Russians," and he knows what it's like to miss a child; two of his children are in college in America. That's why he joined the struggle. Now he was about to walk down the road from the clubhouse to the main plaza, perhaps for the last time.

The Gilad Shalit drama has ended, and it ended well. The tears are flowing of their own accord.

This story is by: 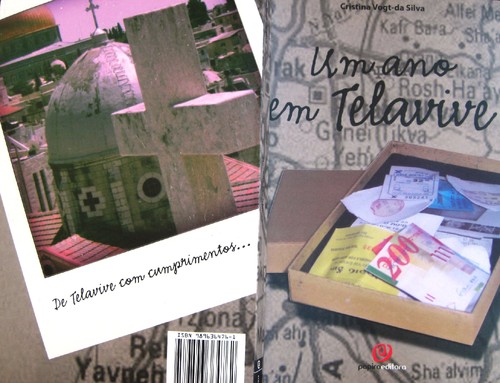